Once again the Royal Naval Hospital opened its iron gates to the public this weekend as part of the nationwide Heritage Open Day programme. Guided visits were provided to the Chapel and the former Nightingale Ward.

Amongst the many visitors, we were delighted to welcome back a number of former workers from the Hospital's days as the St Nicholas NHS Hospital, which closed in 1993.

The group of friends, pictured below with our own Mandy McGill, made their first return since the hospital's closure and were delighted to see the sympathetic manner in which the buildings had been converted into residential houses and apartments. They had many happy memories of their time working at the hospital and told of the sadness of staff and patients at its closure. 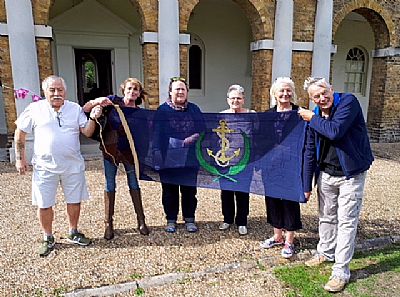 They were kind enough to bring along the Naval Hospital flag that was lowered when the St Nicholas Hospital closed.